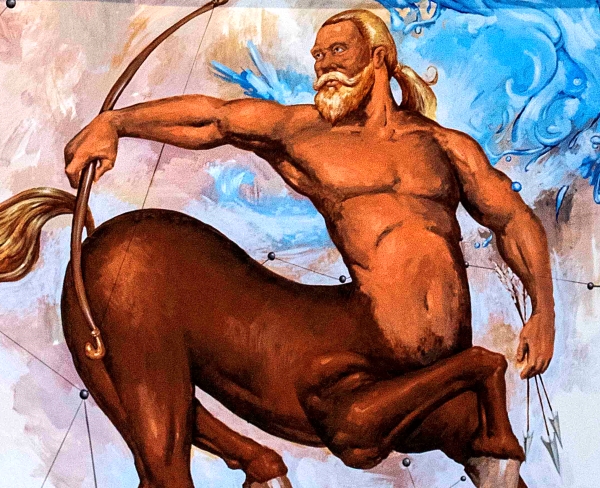 The famous mythological personality and story of the Centaur Chironas, which is so rich in symbolism, has been an inexhaustible source of inspiration for many researchers for countless years.

Chironas is a centaur – meaning half man and half horse. However, he is no common Centaur…

First of all, he is a demigod (son of the nymph Philyra and the god Cronus) and therefore immortal; secondly, because -unlike the rest of his kind – what distinguishes him is virtue and wisdom. The Centaurs are often referred to as bestial beings in mythology, violent and irrational, while what prevails in Chironas is a nature more human and ultimately, divine.

Chironas might owe his divine nature to his father Cronus, however, it is cultivated and developed through his adoptive father, Apollo. Abandoned by both his parents immediately after birth – “lucky” in the midst of his “misfortune” – Chironas is adopted by the god Apollo and is raised beside him.

It would be safe to assume that the orphan Chironas, having suffered major injuries from a destiny that is anything than easy, is desperately trying to heal his wounds – he wishes to stop hurting – and ends up devoting his entire life to this end.

This is how he becomes the biggest mythological healer of Greek antiquity and by extension, the entire Western world. He initiates Asclepius into healing and takes on the training of almost all mythological heroes – he “treats” Hercules, Perseus, Achilles, the Argonauts and the list goes on and on. All mythological heroes find in the archetype of Chironas, a good magician, an educator and a great mystic. Mostly, though, in him they find their teacher and the much needed healer of their consciousness. Chironas is essential for them before they move on to bigger and better things, before they undertake their feats.

The Archetype of the Centaur Chironas is certainly that of the wounded healer. Through his own mythology Chironas reveals a lot about healing on many different levels.

Since he was a child, he seems to be experiencing intensely a very painful division – a schism. He is the victim of his mother’s rape by his father and inevitably, takes on the mission to reconcile, within him, the victim with the perpetrator. At the same time, his appearance symbolizes – equally characteristically – another dichotomy; that between the man and the animal. In turn, the human and the animal nature are reconciled in the form of the Centaur. Chironas is obviously tormented by severe “bipolarity” and an extremely oppositional nature.

How does he do it?

The adoption of Chironas by Apollo is a focal point in this archetypal story that everyone can and should explain for themselves. Apollo gives this little monstrous orphan demigod a most luminous upbringing. He gives him, as a remedy, the light arts – art, archery, therapeutic art… Chironas grows up with the god and his Muses and thus, manages to transmute his own pain and “dark fate” into something actually useful!

Chironas symbolises an archetypal power and therefore a force within us – within each human, and especially within any human experiencing pain and therefore suffering.

It is his power of self-healing – the power that pushes us to seek cure and allows us to transform the pain of the past into something useful for the future, for ourselves and for other people. This way the pain made sense, because they lead us somewhere. Time is not only a healer but it is also essential.

And symbolically Chironas leads us from Cronus (the planet Saturn) to Uranus. From Cronus that gave birth to him to the starry Uranus -where he eventually takes his place as a constellation.

Between these two planets – Saturn and Uranus, at the intersection of their orbits, one would say – as recently as 1977 a tiny planet was discovered that was officially classified as a comet and an asteroid. It was unanimously decided by the astrologers and astronomers in 1979 that it would be named Chironas.

Chironas bridges, most characteristically and symbolically, a gap in our consciousness. He embodies the power of self-healing, which is the necessary vehicle for any human consciousness to go from the sphere of time (Saturn) to the sphere of the timeless and the transcendental (Uranus). It seems that all the pain, all the pathways and all the time are necessary.

In the mythological story of Chironas there is one more detail that is often forgotten.

Chironas hurts all the while he is alive and so, he asks the gods to cease being immortal. The only way to permanently be rid of the pain is to put an end to his earthly existence. And at some point, his wish is granted. So, Chironas ends up being a constellation or a planet.

The most interesting part of this story, though, is the synchronicity of the final redemption for Chironas, which occurs simultaneously with the release of Prometheus. When the latter, who had been enchained for his greed, walks free, then and only then do the gods consent to the redemption of Chironas and allow him to retire in the sky.

And Prometheus had always represented in mythology, man and mankind.